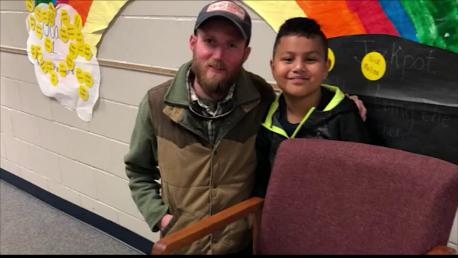 Angel Cortez was born without arms, but that doesn’t stop him from being an active 10-year-old boy.

“He does everything a normal kid does in a different way,” says Carina Cortez, Angel’s mother.

Angel, a fourth grader at Quitman elementary, had a special desk made for him which he sat at in his classroom.

“He had one desk, but it was big and it was just a chair and he was only able to keep it in one room,” said Cortez. “

When he moved to fourth grade and was going to be moving from class to class, his teachers and the school staff knew he needed something different.

“I talked to Chris [a maintenance employee at the school] and we met and looked through some storage rooms that we had for some desks we could cut apart,” said Lance Morrow, the assistant principal at Quitman Elementary. “He came back a couple days later with what Angel has now and it’s so much better than what we had talked about.”

Angel’s new desk allows him to move from room to room by himself.

Angel has named his desk Billy and says he has thanked Mr. Chris a lot.

“I’m very thankful for his ability to build a desk for him,” said Cortez. “For making him feel like he fits in.”