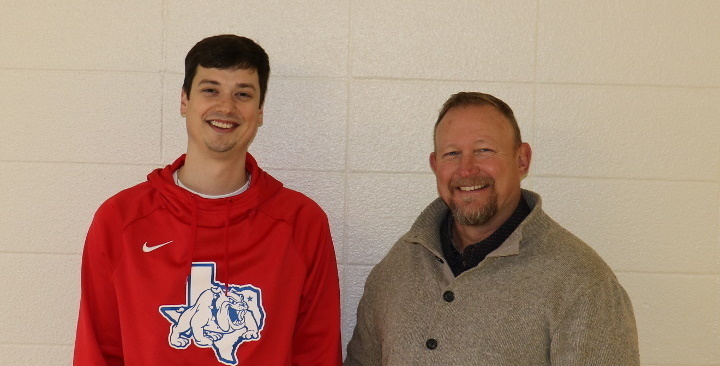 After clinching the last playoff spot for District 13-3A with an impressive win against the Winona Wildcats on January 29th, Coach Blake Hamrick will lead Quitman’s Lady Bulldogs to Pattonville on Thursday, February 11th, for bi-district playoffs. They will compete against DeKalb at 8 p.m. at Prairiland High School (466 Farm Road 196, Pattonville, TX). Tickets can be bought at the door for $5 each, and there will be 300 seats available for each side.

Coach Webber, a 1987 QISD Alumni, first joined the staff at QISD in 1999 after being asked to come on board by his former basketball coach, Robert Linker. He did not start coaching girls until around 2006. Webber said it took about four years to get the Lady Bulldogs to the playoffs. It would be the first time they would see playoff action in 19 years. Around the same time, he was also taking the Lady Bulldog Softball team to the playoffs for the first time ever in the school’s history.

While Coach Webber was enjoying success at Quitman, Coach Hamrick was graduating and moving on to attend school at Texas A&M. Hamrick originally wanted to coach at the collegiate level and had the opportunity to work with the men’s basketball team at Texas A&M. After working with college players for a while, though, he realized he could make a bigger difference in the lives of high school kids.

Hamrick would take a job coaching boys’ basketball for both a homeschool organization at College Station and then at Alba-Golden. He moved over to coaching girls’ basketball at one point and has never looked back.

Both coaches have thoroughly enjoyed coaching female athletes. Webber enjoys how female athletes “love to be coached at the highest level.” Hamrick appreciates how well female athletes take criticism and how they are humble and coachable. Webber would begin coaching girls’ sports around 2001/2002 with the intent to spend more time with his own daughters, who were all athletes here at QHS. With the move came the responsibilities of coaching 3 sports—football, basketball and softball. Definitely a challenge—but one Webber took full advantage, creating some really strong athletic programs during his tenure here the first time.

Hamrick and Webber have a unique relationship that began when Hamrick was a 7th grader playing for the football team. Coach Webber coached Blake from 7th through 12th grades. Hamrick said that Webber “was a huge impact on me high school and still remains a mentor to this day.” He went on to reminisce about his favorite moment with Coach Webber, which happened his senior year at the Caddo Mills football game. Hamrick remembers that he had made a mistake right before halftime. When the team went into the locker room at the half, Webber offered some strong criticism, but “before we went back out to play the second half, he pulled me aside, gave me a hug and told me he loved me.”

Conversely, Webber’s favorite memory of Hamrick was about a success of Hamrick’s that happened the year Quitman beat Winnsboro at home for the first time in many years.  Hamrick caught the game-ending interception that night. Webber described Hamrick as a “long, gangly kid—who in all honesty was only playing football because his friends were.” Webber continued, “I remember talking to him on the sideline about how we knew that Coach Pinnell (Winnsboro’s Head Coach) liked to throw the ball once he got to certain point on the field. Since we had the lead, it was inevitable that this was the case...So talking to Blake, he knew what to expect and executed to perfection. I could never have been more proud of one of my kids.”

Coach Webber said that he never thought Hamrick would have gone into coaching “but I am glad he did.” He always thought of Hamrick as being a leader in the areas of business or engineering. Webber added that he believes Coach Hamrick has always been a leader and very intelligent, “but the thing that I admire most about him was the ease in which he navigated conversations—which is an awesome quality as a coach and a teacher.” Webber added that Hamrick “really never feels uncomfortable in any situation.”

Now the two have come full circle and are back at QISD, working together to impact the future generations of Quitman athletes and students. Webber said that if he offered advice to Coach Hamrick for the upcoming game Thursday, it would be to “do exactly what you have been doing; don’t change who you are or what you expect from your players. If you come in too tight—or on the flip side, too ‘loose’—the players will sense it and try to compensate for you. Just play your game.”

Preparing the girls for Thursday’s game has been a little challenging since they didn’t know who their opponent was until late Tuesday evening. While preparing earlier in the week, Hamrick stated that they “are just focusing on doing our stuff and perfecting our craft right now. We will game plan and focus on our opponent on Wednesday.” Hamrick further offered that “the girls are excited and have been locked in and are ready to play whomever we have to.”

As far as the future of the Lady Bulldog’s basketball team goes, Hamrick’s long-term goals are to always be competitive. “I preach to the girls to be process oriented, not goal oriented. If we focus on getting

better every single minute/day/week/month/year, then the goals will take care of themselves.” Hamrick expanded, “This year is the perfect example: we are young, and we struggled early in the season. But we stayed committed to the process of constantly improving, and by January we were seeing the results we wanted. I’m excited for the future and for these girls.”

The future looks bright for Hamrick, Webber and most importantly, for the student athletes of QISD. Hamrick and Webber look forward to working with each other, and building strong programs for our student athletes—both current and future. Hamrick is excited to have his mentor back at QISD. “I know he will be a total program athletic director….I’m looking forward to working with him.”

Webber added that his goals as Athletic Director are the same for both girls’ and boys’ programs. “We are going to raise the bar of expectations for all of our programs and not just settle for what we are given, but dedicate ourselves to what we deserve.”

Raising the bar of expectations has already begun for the Lady Bulldogs as they head into playoffs for the first time in almost a decade. Be sure to show your support. Make plans to attend the game at Prairiland High School Thursday night at 8 p.m. Come early and cheer loud!