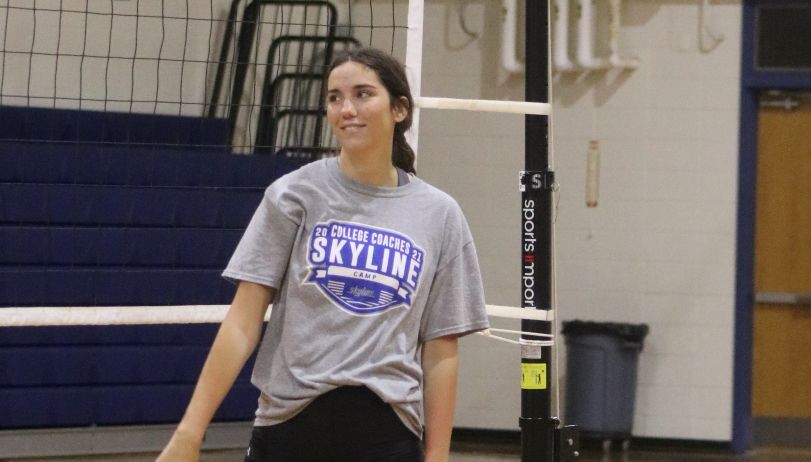 Senior Ava Burroughs has orally committed to attend the University of Texas at Arlington. The 6’3” Senior Middle Blocker first fell in love with volleyball when she started playing club ball about seven years ago. She’s always played basketball, but her love for volleyball is stronger. “It just clicked more naturally for me,” Burroughs stated.

Volleyball may have clicked naturally for Burroughs, but it has taken a lot of time and discipline to get where she is now. Her days begin around 7 a.m. and often don’t end until midnight. Her days go by swiftly between school, school practices, club volleyball practices and homework. Burroughs said she couldn’t do it without her mom, Kevan Burroughs. Burroughs said that her mom usually drives her to club volleyball practices, and they get to have lots of bonding time during the drives.

Verbally committing to UTA was a surprise to some and happened very quickly. Burroughs had previously been considering Dallas Baptist University and other schools. But DBU had a head coaching change right around the time Burroughs met the coach for UTA while attending a clinic. A few phone calls and zoom meetings later, the coaches from UTA offered her a spot on the team. “There was no doubt in my mind that this is where I wanted to go. It happened very fast, but I know it’s the right fit for me,” Burroughs said.

Head volleyball coach Ashlee Lingo received the news when she got a call from Ava. She stated, “I am so excited to see Ava getting one step closer to living her dream of playing collegiate volleyball. This has been her goal since she started playing at a young age! She has been one of the most dedicated players I have had the privilege to coach! Ava will be a great addition to their program in the fact that she will never give up and will always be dedicated.”

Burroughs will report to UTA next July and plans to major in Business. Until then, she plans to stay active in school sports, as well as her club team. Due to several quarantines last year, Burroughs didn’t get to play volleyball (or basketball) as much as she would have liked last year. She’s looking forward to seeing more action this upcoming season. “I think it’s going to be an interesting year. We have a lot of potential. Last year was rough, but it was a learning experience for our team.”

When Burroughs was asked what being a Quitman Bulldog meant to her, she replied, “Being a Bulldog has taught me to push myself, but I always know that I have people supporting me along the way. The athletic program her is truly a family. Every single athlete in the program works hard and especially for the past few years, we are so eager to have that winning mentality.”

Burroughs plans to sign her official letter of intent on National Signing Day on November 11th.